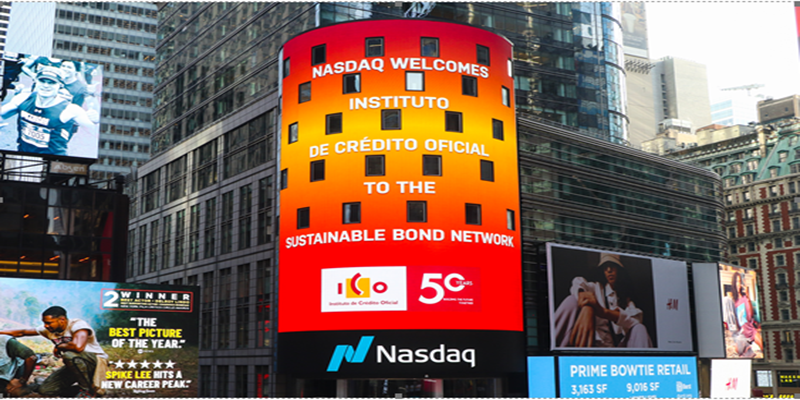 Fernando Rodríguez | Spanish issuers are becoming increasingly active in the global sustainable finance market. The state Instituto de Crédito Oficial (ICO) has joined this Nasdaq Sustainable Bond Network (NSBN), the platform that concentrates relevant information on issuers of sustainable bonds and transactions from all over the world with the aim of promoting transparency in this market. Iberdrola was the first issuer to join this platform in October last year and BBVA was the first Spanish bank to do so a month later.

According to the Green Bond Initiative (GBI), Spain has been in seventh place in the historical world ranking of green bond issuers for the past five years. The cumulative debt for the period 2015-2020 was EUR 28 billion. 3.4% of the EUR 820 billion spent worldwide excluding social and sustainable bonds. According to GBI, Spanish issuers – since Spain has not yet issued any green government bonds. Although this is planned for this year, green bonds worth the equivalent of EUR 7.16 billion were issued in 2020, placing them ninth in the ranking of the largest global issuers. This was led by the United States – with more than 42 billion euros – followed by Germany, France, China, Holland, Sweden, Japan and Canada in descending order.

The Spanish ICO is one of the main issuers in the European sustainable debt markett, with 9 issues – 7 of social bonds and 2 of green bonds – for a total of 4.55 billion euros.

In addition to ICO, Iberdrola and BBVA, the NSBN network includes international multilateral, public and private issuers. Among them are the International Finance Corporation of the World Bank Group, the Italian national advertising bank, the counterpart of ICO, Cassa Depositi e Prestiti (CDP), the Agence Française de Développement (AFD), the German NRW and the DKB.

In NSBN, issuers share information about the standards they follow in their transactions with environmentally friendly, social or sustainable bonds – such as the ICMA Green Bond Principles or Social Bond Principles – as well as their emission limits. In addition, They share data on the impact and typology of the projects financed with the funds raised under these operations and their relationship with the Sustainable Development Goals (SDGs). This enables comparability and transparency in decision-making and positions this platform as a benchmark tool among sustainable debt instruments. NSBN Global Advisory Board consists of leading public and private investors, issuers and organizations including Allianz GI, Alecta, APG, Pimco, Fannie Mae, NIB, Bloomberg, Sustainalitics, Vigeo, CBI, CACIB and SEB.

ICO is urged to analyze secret recommendation from Tory events

ICO is launching the fourth and remaining section of the Privateness...