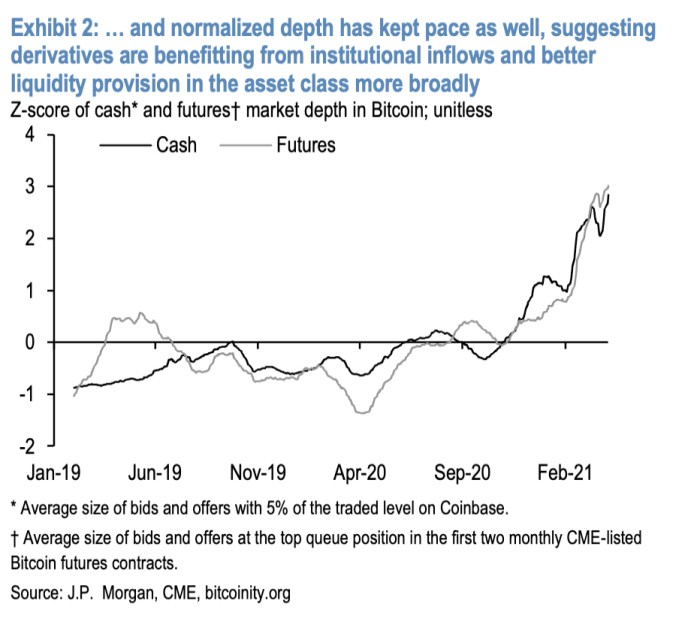 In a report titled “Why is the Bitcoin Futures Curve So Steep?” JPMorgan Chase analysts examined the growing Bitcoin futures and derivatives market, provided insights into why the contango is so steep, and examined what the future holds for the monetary asset as financialization increases.

Here are some of the highlights from the report.

“As is so often the case in the past, the growth and gradual maturation of the cryptocurrency markets has naturally sparked interest in derivatives and other sources of leverage. Although futures trade against a number of pairs, Bitcoin is unsurprisingly dominating this emerging market. Similar to the spot market, these products are traded in a highly fragmented ecosystem with almost 30 active venues. The vast majority also trade offshore, with less than 15% of total open positions listed in major regulated domestic venues such as the CME (Figure 1). The normalized depth of futures has also kept pace with the deepening of the cash market, which suggests that it too is benefiting from institutional inflows and an improved supply of local liquidity (Figure 2). ”

With the introduction of CME bitcoin futures contracts in late 2017, US institutional investors had access to exposure to bitcoin derivatives, but access to “spot bitcoin” was harder to come by, even though market capitalization for bitcoin rose further than 200 percent above the 2017 high.

The analysts gave possible reasons why the contango has remained so large. JPMorgan’s possible explanations include counterparty and repatriation risk in offshore markets, complications in obtaining spot BTC exposure in the legacy system, and subsequently the Grayscale Bitcoin Trust (GBTC) as the main source of BTC exposure on the street (and all others) of the premium / discount problems associated with the investment instrument).

“Why weren’t such attractive prices just thrown away? One could perhaps blame counterparty and repatriation risk in unrelated offshore markets, but certainly not the CME. In a market with rampant bullish sentiment and heavy retail exposure, it is tempting to simply blame leverage demand. And that is certainly true to some extent. However, there are also some more idiosyncratic but equally important aspects of the design of these contracts in the context of market segmentation that are specific to Bitcoin and that likely explain a significant part of that wealth. ” 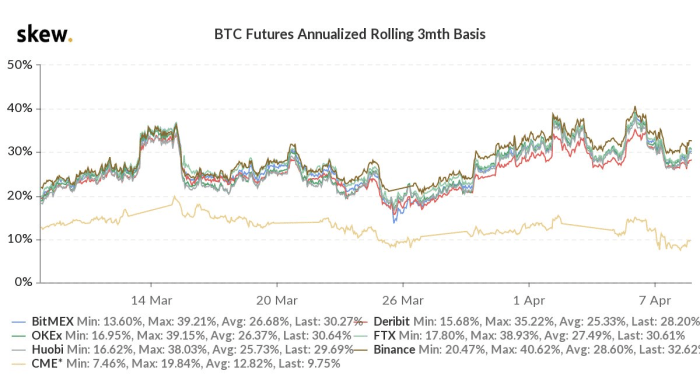 JPMorgan expects the introduction of an exchange traded bitcoin fund (ETF) will compress the returns offered by trading as a liquid investment vehicle trading at net asset value (NAV) will give investors access to “spot BTC” that they need to provide in order to execute arbitrage trading.

As shown in the chart below, the net positions in the CME bitcoin futures market show that hedge funds have continued to add to their short positions through 2021 and were around $ 1.45 billion at the time of writing. Are Hedge Funds Bare Short Bitcoin? Absolutely not, they simply execute the cash and carry trade and capture the large spread in the process. 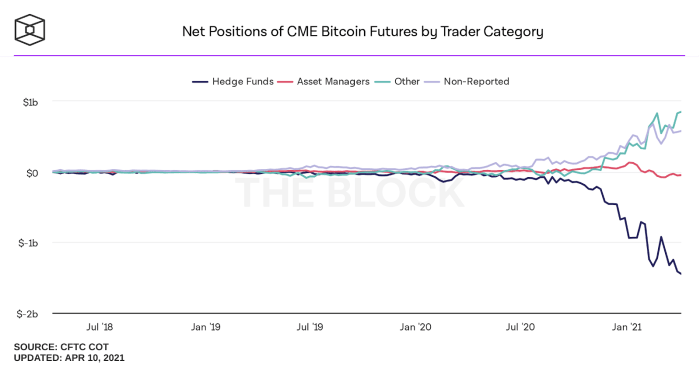 “These basic transactions are particularly attractive in the cryptocurrency market. As of this writing, the June CME Bitcoin contract offers an annualized slide of ~ 25% relative to the spot. The wealth of futures is even more acute when we broaden our perspective to unrelated exchanges where carry can be as high as 40 +% (Figure 4). In this context, very few fiat currencies, including developed and emerging markets, offer easily monetizable local returns (e.g. from FX swaps) greater than 5% (Figure 5). There is of course the special case of TRY, but with local consumer price inflation of around 10% or more compared to the explicitly deflationary monetary policy and cross-border portability of Bitcoin, this hardly seems like a plausible substitute. “ 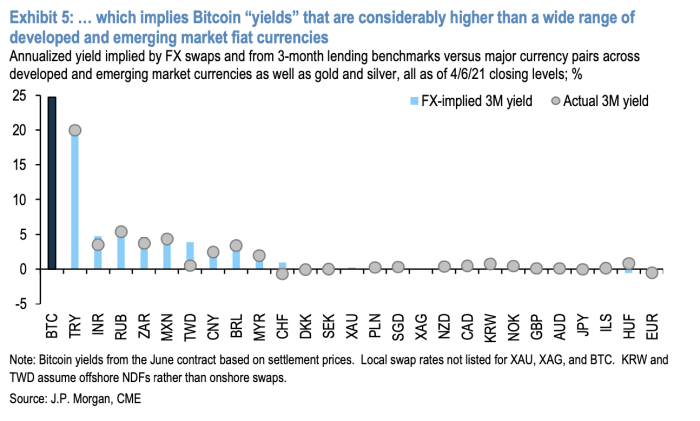 For JPMorgan, comparing Bitcoin to foreign fiat currencies is fairly optimistic, highlighting not only the massive opportunities offered by the steep futures curve, but also highlighting the asset’s disinflationary monetary policy, transferability, and global liquidity throughout the report. The analysts also pointed to the global aspect of Bitcoin’s liquidity and market penetration, showing the returns offered on CME futures as well as other offshore markets. 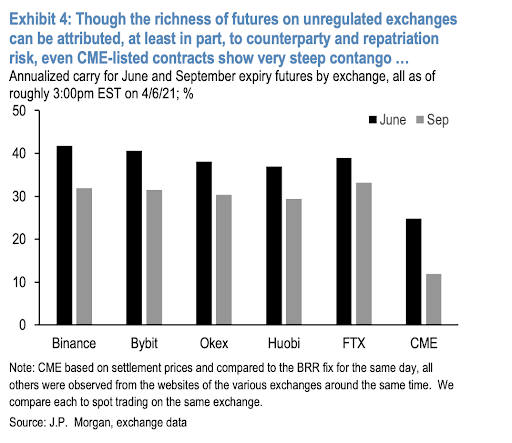 The report also pointed to the introduction of a Bitcoin ETF as a key step in the liquidity and trading volume of assets in the future.

“In our view, launching a Bitcoin ETF in the US is key to normalizing pricing for Bitcoin futures. As already discussed in detail, this could remove many barriers to market entry and bring new potential demand into the asset class. A risk factor worth considering, however, is that it will make basic trading at current prices much more efficient and attractive, especially if these ETFs can be bought at margin. We would expect this to bring greater base demand into the futures markets, particularly the CME, but possibly other onshore exchanges as well. As contango normalizes for these contracts, we would also expect some transition to pricing on unaffiliated exchanges as there is likely to be some arbitrage activity between the two. ”

In a major but anticipated development, the major banks appear to be keeping a significant eye on the Bitcoin market. JPMorgan is certainly not the only legacy institution keeping an eye on developments in the ecosystem, and it’s only a matter of time before they get in touch, possibly via cash and carry trading.

The key question for investors is what if the contango doesn’t normalize as the market for bitcoin spots and derivatives continues to grow exponentially.