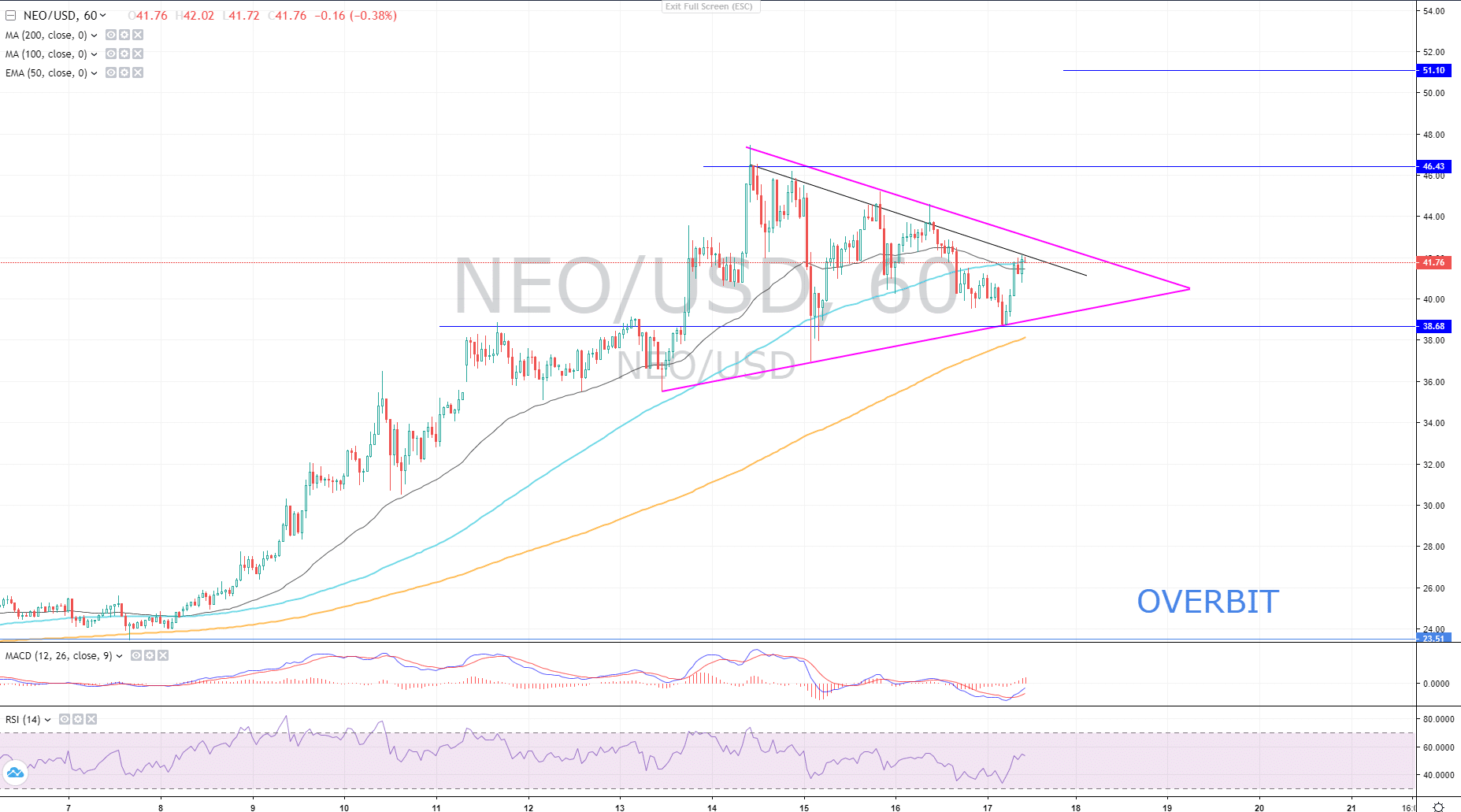 The February 15 dump proved once again that even in the online markets, bulls are exhausted for such long stretches.

The market recovered quickly and we noticed a large lower wick on a 4H candle for all major cryptocurrencies. In general, such a price move clearly shows that the bullish sentiment remains and buyers are ready to push the price higher after a brief pause.

Currently, almost all major altcoins are following the same pattern and at first glance it might look like the start of the downtrend. While Bitcoin hits a new all-time high today at $ 51,700, other coins like NEO and Cardano are still trapped in a triangle struggling to break the resistance to continue the uptrend. However, EOS could break it.

NEO and EOS are both in the process of updating their networks, Neo is working on the introduction of NEO 3 and EOS is working on improving EOSIO 2.1 which is releasing the RC of this update. On the other hand, Cardano had launched its Fund4 of the project catalyst with ADA worth $ 1 million to improve on-chain governance for Cardano.

Technical analysis of all three tokens against the US dollar suggests that all three still look optimistic, despite NEO and ADA struggling to break their resistances.

As can be seen in the graph above, Cardano is in a danger zone below the February 11 dynamic resistance. To continue the uptrend, ADA / USD needs to close above USD 0.87650. There is great support from the EMA50 and MA200 on an hourly chart. MA100 acts as resistance at the time of this writing while MACD and RSI signal the bullish continuation. If the breakout is confirmed, the impulse will drive the price to $ 0.97630 and $ 1.06 above that level.

Backed by the MA200 and EMA50, EOS / USD must continue the uptrend to reach MA100. The next resistance is at $ 5. If you close above this level the EOS will rise to $ 5.60 and if the pace continues to rise to $ 6. MACD has already crossed the signal line and RSI is still below the overbought area.

NEO / USD has not yet reached dynamic resistance and is slightly behind ADA and EOS in a “bullish” marathon.

The pair has reached local short-term resistance on an hourly chart and closed above the EMA50 and MA100. MACD is above the signal line and below the 0 threshold, meaning that after a test of the main resistance at $ 46.43, the price could rise towards $ 51 if buyers push the price above the dynamic resistance and above $ 43. On the flip side, NEO could move back from that level to test the dynamic support again at $ 39.10 and move up from there.

There is a big announcement day from the US today as retail sales, CPI and core CPI data show the purchasing power of the US population and highlight the US economic recovery projects. Positive data will bolster the US dollar, so expect a slight correction.

Based on dealer Elliot Wainman, these altcoins are prepared for 1,000x...

Bitcoin holds on to excessive worth whereas altcoins wrestle at the...